For the first half of April the weather in my corner of France was spectacular. The skies were blue and the temperature was nudging 20+°C. Spring had definitely sprung and summer looked just around the corner. Unfortunately that has all now changed. Instead the skies are grey, the weather is wet and windy and I’m back in my thick warm jumpers.

Luckily I had finally got around to deciding what I wanted to cook for April’s Cheese, Please! Challenge and had decided on a pie! Perfect to warm, and cheer, me up in this dreadful weather. The theme for this month’s challenge was blue cheese and so the pie I was making was filled with beef, beer and blue cheese. 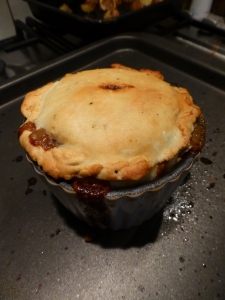 Beef and blue cheese is a classic combination, but one more usually seen in the form of cheese on a burger or a Roquefort sauce with steak. However adding blue cheese to the gravy of a beef pie is another great way to enjoy the pairing. The blue cheese adds a rich salty savouriness to the sauce and really gives it a bit of oomph and depth.

Beef, Beer and Blue Cheese Pie – Adding the blue cheese to the sauce

After a recent trip back to the UK for Easter I am in possession of two different British blue cheeses: some Stilton and some Blue Shropshire (I also have some Danish blue from IKEA floating around in the fridge but given Fromage Homage’s passion for British cheese I thought I’d better not use that one ;-)).

After a fair bit of umming and ahhing I decided to use the pungent salty Stilton in my pie instead of the slightly creamier Shropshire Blue to make sure I got as much blue cheese flavour in the final dish as possible. If I’m going to add cheese to a dish I want to be able to taste it and enjoy it and I thought the Stilton had the best chance of standing up to the beef and the beer. 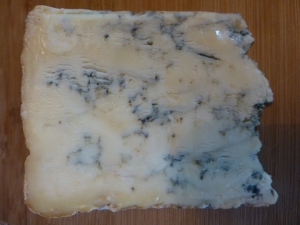 When this was cooking you could certainly smell the Stilton as well as the meat and beer. My kitchen was awash with cheesy and beefy aromas and my stomach was rumbling.

By the time the pie was ready I was starving and unfortunately, in my hurry to consume my creation, I dropped the pie onto the plate and split it open! While I had originally planned to take a photo showing the sauce and the inside of the pie, I had been hoping for a rather more elegant shot! 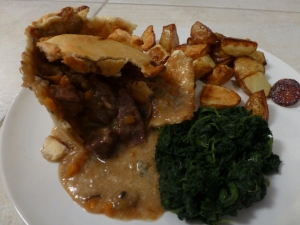 Beef, Beer and Blue Cheese Pie – “Served” – or rather dropped onto the plate!

Nevermind, you have to break it to eat it and it tasted wonderful! You could definitely taste all the lovely Stilton but at the same time it wasn’t overpowering – you can also taste and enjoy the beef.

I Am Not a Housewife
LAWLESS EATS

Having M.S. is NOT the end

Now that is exactly the question. What is this flippen blog about? I am like a crow. If it shines, I like it. If it is pretty, I like it. If I can eat it, even better!

Seasoning while rocking out since 1983

Ramblings on wine from a German in Ann Arbor

Herbs and Spices Rock My World

Food Innovator, Recipe Sharer. My kitchen is small but mighty.

The Sister Slice
from the Bartolini kitchens